On October 7-10, 2018, Bodrum, Turkey, the 2nd International Plant Science and Technology Congress (IPSAT 2018) and the 5th National Botanical Congress took place. At the same time, simultaneously with the 2nd Aerobiology and Palynology Symposium (APAS 2018) worked. Thus, three scientific events were held together to discuss research in various fields of plant biology, as well as methods and technologies of plant use. The organizers of the IPSAT 2018 and the National Botanical Congress were Anadolu University, while the APAS 2018 was hosted by Kastamonu University. Both the congresses and the symposium were organized under the auspices of the Nobel Science and Research Center (Fig. 1). 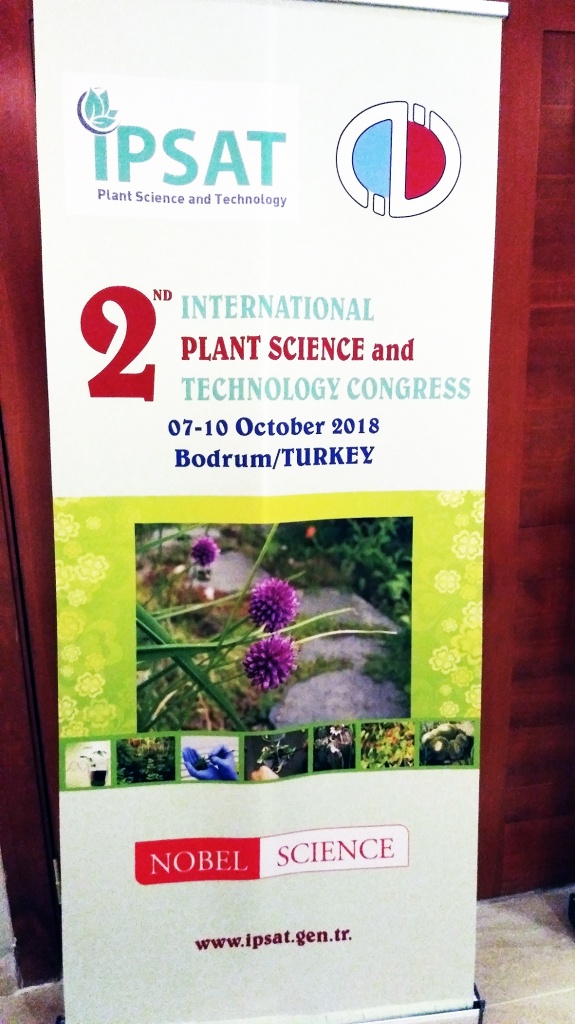 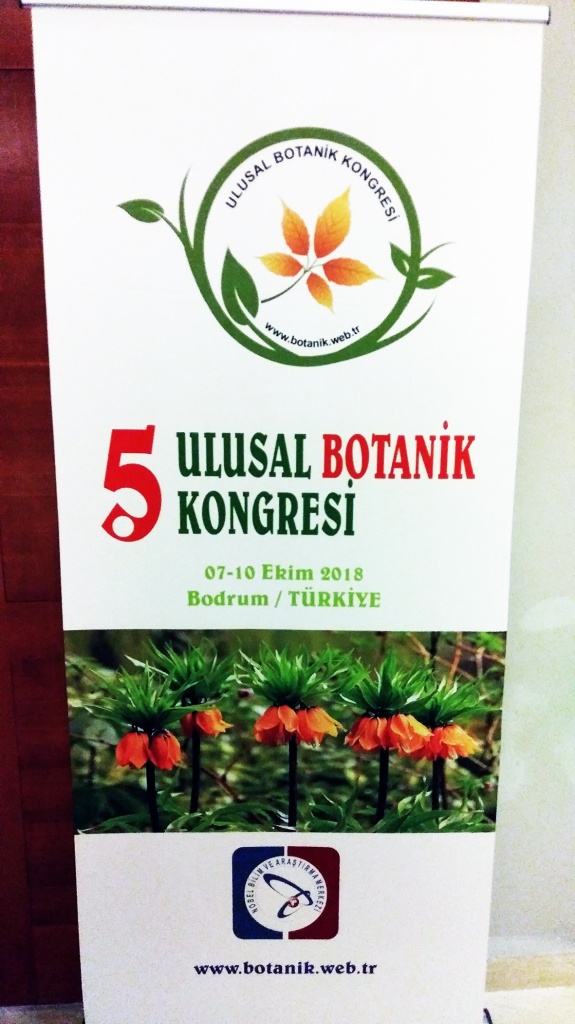 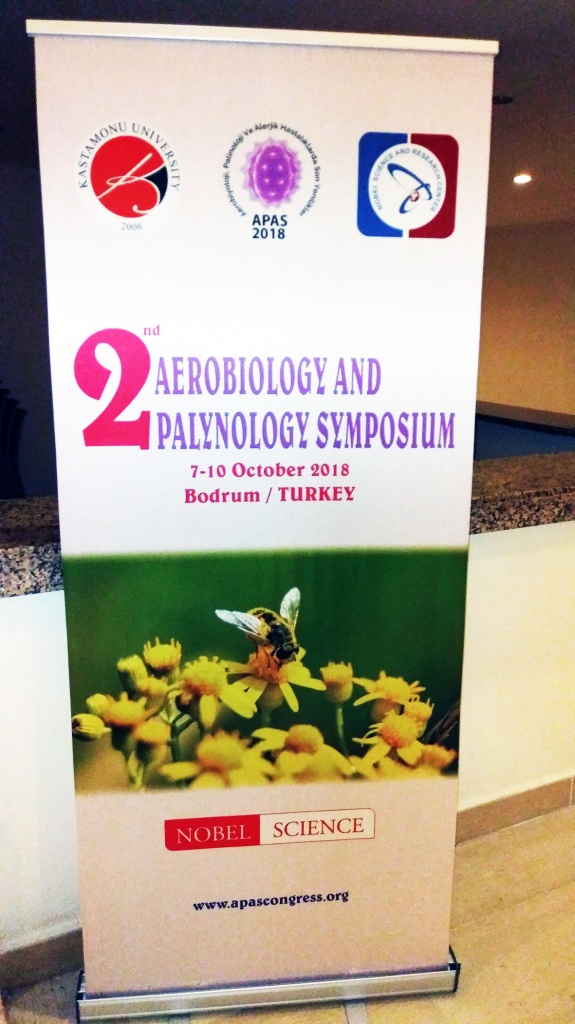 Fig. 1. Banners with the logos of the 2nd International Congress on Plant Research and Technology (IPSAT 2018), the 5th National Botanical Congress and the 2nd Symposium on Aerobiology and Palynology (APAS 2018) (photo by T. S. Sedel’nikova).

Anadolu University founded in 1982 in Eskişehir is the country's largest state university and ranks fourth in the world by a number of students (880,000). Kastamonu University established in 2006 in Kastamonu is a young university with about 20,000 students and more than 1,600 post-graduate students Kastamonu University has promptly joined scientific, educational, social, cultural, and sports activities and established itself as “developing young university” in a short period of time. The Nobel Research Center was established in Turkey in order to get people, especially young people, interested in scientific ideas and modern technologies and contribute to the development of science.

The chairman of the IPSAT 2018 and the National Botanical Congress was ProfessorErsin Yücel, Faculty of Science, Department of Biology, Division of Botany of Anadolu University. The members of the Scientific Committee of these congresses were researchers from 17 countries: Albania, Azerbaijan, Bosnia and Herzegovina, Bulgaria, Czech Republic, Greece, Hungary, India, Kazakhstan, Kosovo, Lebanon, Macedonia, Morocco, Russia, Turkey, Ukraine, and USA. Russia was represented in the Scientific Committee by Professor Sergey L. Menshchikov, Head of the Laboratory of Ecology of Technogenic Plant Communities, Botanical Garden, Ural Branch of the Russian Academy of Sciences, Ekaterinburg, Professor Tamara S. Sedel’nikova, Leading Research Scientist at the Laboratory of Forest Genetics and Breeding, V. N. Sukachev Institute of Forest, Siberian Branch of the Russian Academy of Sciences, Federal Research Center Krasnoyarsk Scientific Center, Siberian Branch of the Russian Academy of Scienes, Krasnoyarsk.

The chairman of the APAS 2018 was Head, Department of Biology, Department of Botany, Faculty of Science and Arts of Kastamonu University, Associate Professor Talip Çeter. Among the members of the Scientific Committee of the Congress were scientistsfrom 8 countries, namely Bulgaria, India, Finland, Lithuania, Poland, Qatar, Spain, and Turkey.

The scientific events were held in the Conference Center of the Yasmin Bodrum Resort Hotel located 5 km from Turgutreis village in the picturesque surroundings of Bodrum (Fig. 2). 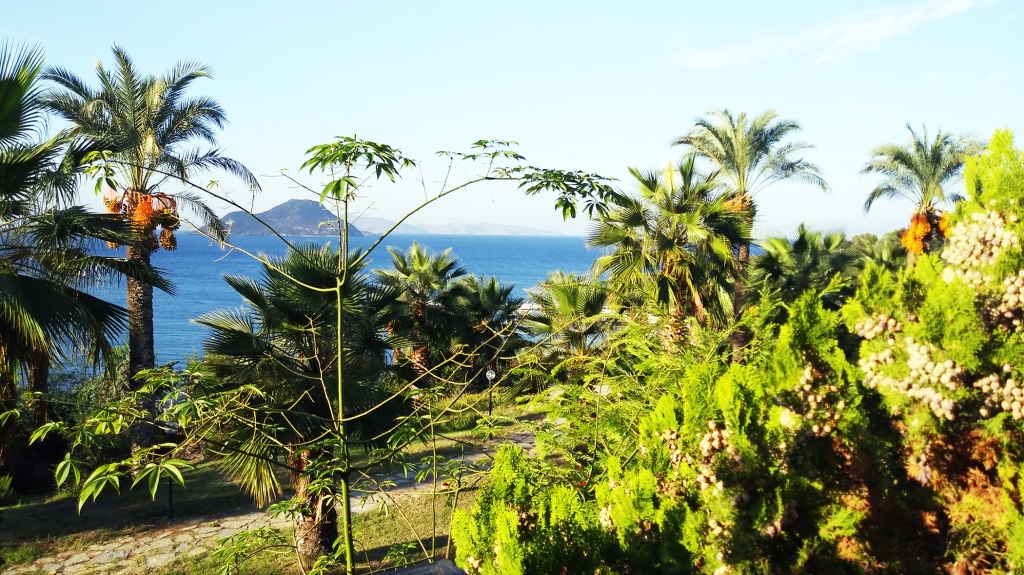 Fig. 2. The surroundings of Yasmin Bodrum Resort Hotel and a park of the city of Bodrum (photo by T. S. Sedel’nikova).

Bodrum is the city and the district of the same name in the province of Mugla in Turkey, to the north of the Gulf of Gokova in the Aegean Sea. In ancient times, it was the city of Halicarnassus (the most famous of its citizens was the historian Herodotus). Halicarnassus mausoleum was considered as one of the “seven wonders” of the world. Later, the remains of the mausoleum were used as the building material from which the Bodrum Castle (St. Peter’s Castle) was built, which to this dayis the main attraction of Bodrum. Modern Bodrum, due to its excellent climate and uniquelandscape, is an international resort with a well-developed tourist infrastructure.

After the opening ceremony on October 7, the agenda of the day was devoted to plenary sessions (the same for all scientific events) called “Aerobiology; Network, Modeling and Health Effect”, “Palynology: Method, Technology and Application”, “Aerobiology, Palynology, Vegetation and Man”, with the invited speakers taking part. It is interesting to note that outof 15 keynotes, eleven were made by women, five of which were foreign invitedspeakers. It was a real “kingdom of women” – not only leading specialists in various fields of biological science, but also amazingly beautiful and charming! 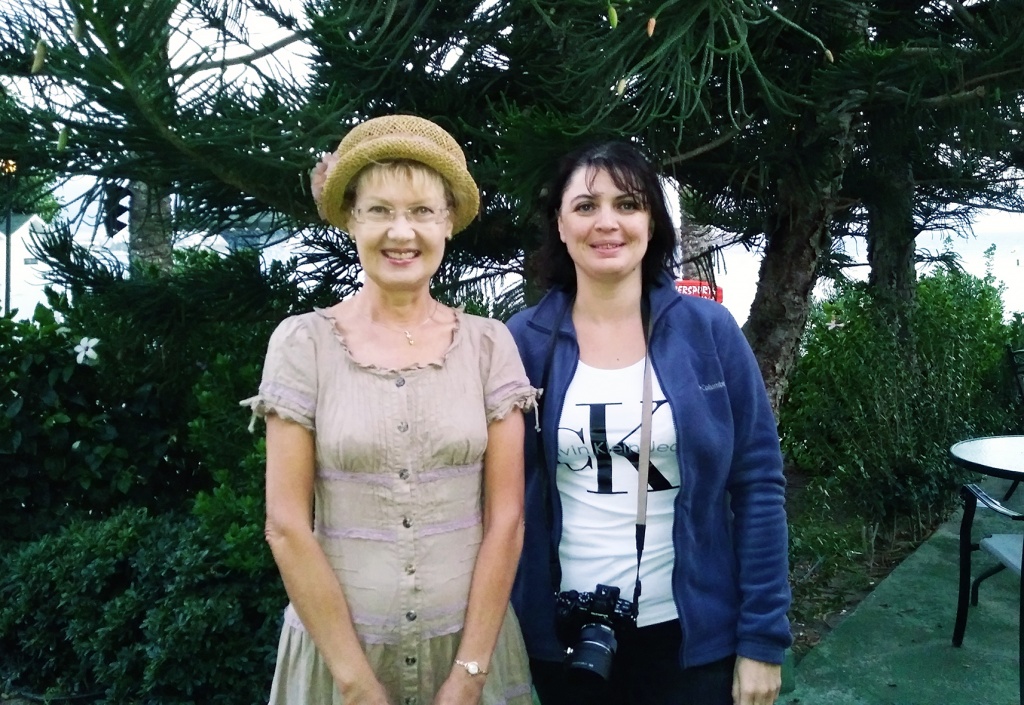 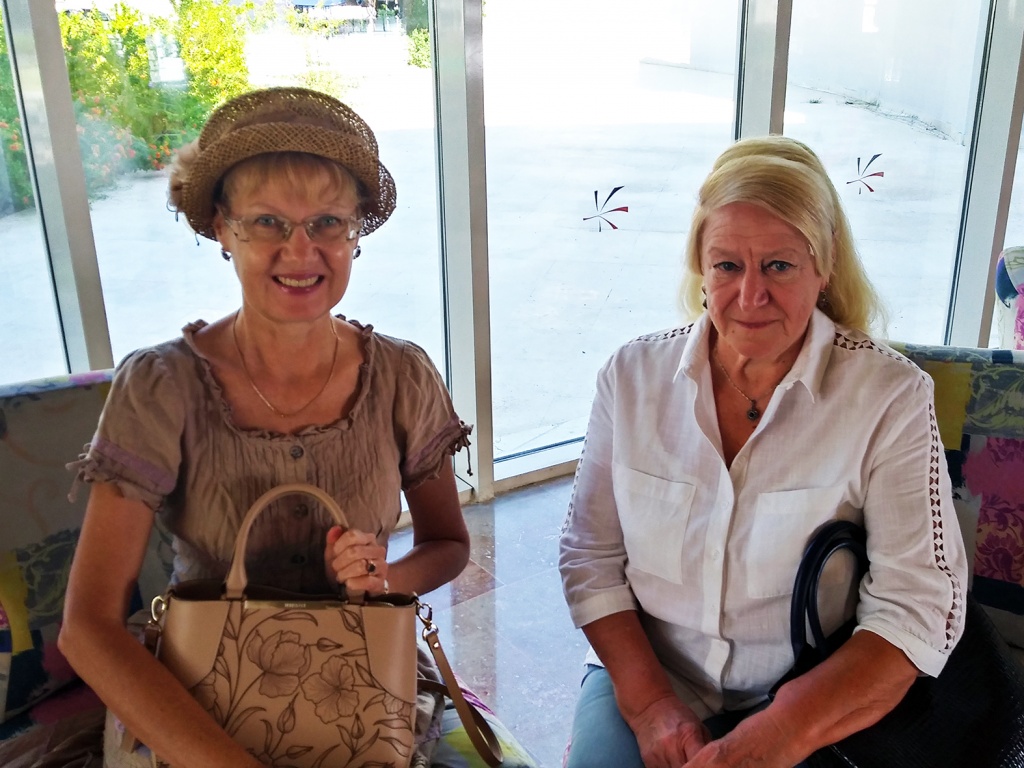 Here I would like to consider several plenary presentations concerned with the study of tree species.

The paper by Professor Rodinkova, a well-known European scientist studying allergy prognosis for people was of great interest. The data on monitoring of plant pollen (including trees) in Oklahoma, USA in rainy weatherresulted in a discovery: rain did not wash away all the collected samples, but on the contrary, it brought a large amount of pollen and spores. Earlier there were statistical data on the increase in the number of asthmatic attacks during thunderstorms recorded for the people with allergies. It was unusual since it was believed that in wet weather the air was clean, and, therefore, thepatients should breathe easily. Later in Australia, and in Italy, the cases were registered when the state of allergic people was bad during the rain, and this phenomenon did not have a clear scientific expalnation. Professor Rodinkova recorded 11,500 pollen grains numbers during the rain, and 8,000 fungi spores per cubic meter of air (the threshold concentration for the development of allergy symptoms is 10-25 pollen grains and 100 spores per cubic meter of air). Moreover, the process of their washing out of the atmosphere can last during several days.

According to the data obtained by V. V. Rodinkova and her colleagues for the west, as well as the north of the forest zone of Ukraine, pollen of birch (Betula), ash (Fraxinus) and alder (Alnus) are dangerous allergens, the concentration of which in peak days reaches tens of thousands of pollen grains per day. Oak (Quercus) pollen can be a serious allergen; its average daily concentration can reach 500 pollen grains per cubic meter of air during peak periods. Pollen of walnut (Juglans regia), linden (Tilia), hornbeam (Carpinus) also cause allergies. To a lesser extent, the symptoms of allergy are provoked by pollen of cypress family (Cupressaceae) plants – species of juniper (Juniperus), thuja (Thuja), and cypress (Cupressus). There is an opinion that poplar (Populus) is one of the most dangerous allergens, but it turned out that its pollen is ... nonallergenic. When studying samples of poplar fluff from rural and urban areas, it was found that the “rural” fluff practically did not contain allergenic pollen, but in the “urban” fluff it was abundant, though it was the “captured” pollen of other plants.

Ass. Prof. I. Kasprzyk presented the data on the morphology and chemical composition of pollen grains of six birch species: Betula utilis Doorenbos, B. dahurica, B. maximowicziana, B. pendula, B. pubescens and B. humilis were examined to verify which of these features allow you to distinguish them unambiguously (Fig. 5). 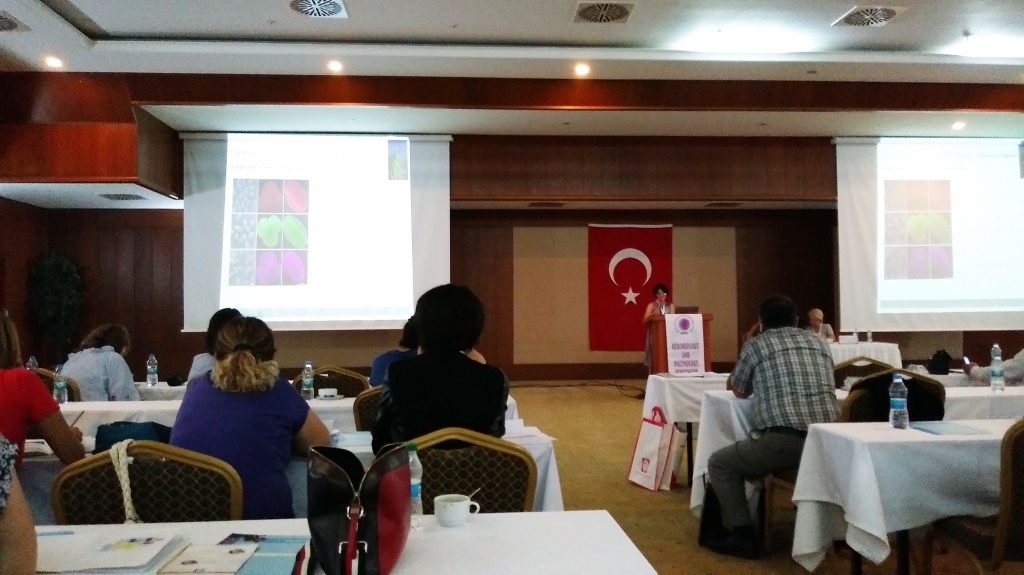 For this purpose, scanning electron microscopy and light microscopy, as well as Fourier transform infrared (FTIR) spectroscopy and curve-fitting analysis of amide I profile, were performed. The obtained results show that FTIR spectroscopy is the most reliable method to study the ecology of these species, their origin and molecular taxonomy. B. humilis is the most remarkable species out of the six analyzed ones for its chemical composition. It is remotely related to other species; moreover, it is distinguished by specific habitat requirements, the area of origin and a small area of occurrence. It seems that in the case of birches, chemical composition of pollen grains is related to these characteristics. The presented biometric method allowed us to distinguish three groups of species, which differ in terms of pollen grain diameter; yet its taxonomic significance is weaker because it relies only on one feature (the size), while spectroscopy analyzes the composition of many chemical compounds.

Later, the work of the congresses and the symposium continued in section sessions. During the work of the IPSAT 2018 and the National Botanical Congress, about 70 papers were presented, including plenary talks. The poster session included 12 papers. A total of 45 oral papers and 23 posters were presented at the APAS 2018. The official working languages were English and Turkish. The conference abstracts were published in the proceedings of the conferences. It was also possible to publish full texts of the papers as articles in the journals Journal of Applied Biological Sciences (JABS), Research Journal of Biological Sciences (BIBAD) or Research Journal of Agricultural Sciences (TABAD). Generally about 130 people attended the meetings of the three scientific events (Fig. 6). 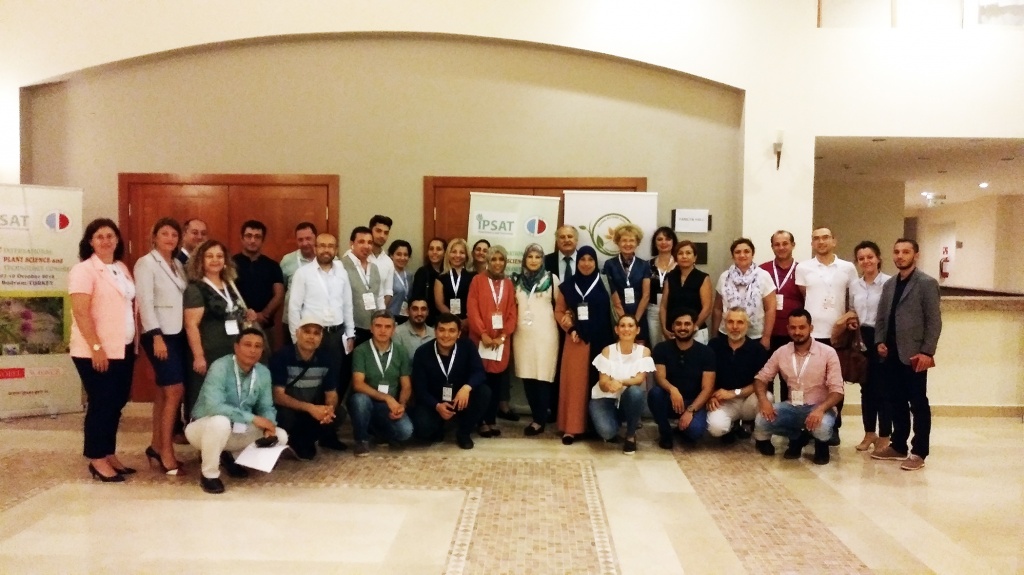 At the IPSAT 2018 Russia was represented at the section “Genetics, Molecular Biology, Plant Biotechnology” by an oral report of the international author´s team: Tamara S. Sedel’nikova, Alexander V. Pimenov, Elena N. Muratova, Natalia V. Oreshkova, Stanislav S. Efremov, Alexander N. Tashev, Guifeng Liu, Xiuwei Wang (Laboratory of Forest Genetics and Breeding, Laboratory of Phytocenology and Forest Resource Management, Sukachev Institute of Forest SB RAS, Federal Research Center «Krasnoyarsk Science Center SB RAS», Krasnoyarsk, Russia; Department of Dendrology, Faculty of Forestry, University of Forestry, Sofia, Bulgaria; State Key Laboratory of Tree Genetics and Breeding, School of Forestry, Northeast Forestry University, Harbin, China) «Karyological and molecular genetic investigation of Pinus sibirica in Western Siberia». The data were presented indicating the genetic differentiation of the Siberian stone pine populations in ecologically contrasting ecotopes of Western Siberia. The material was collected from the trees growing in oligotrophic bog (the most depressed individuals), eutrophic bog, dry valley, and also as partly from the so-called “the near-settlement pine forest” (elite, high-yielding individuals selected during many years by local people). Genetic differences were revealed by the morphological parameters of chromosomes, the level of chromosome number variability, the presence and spectrum of chromosomal rearrangements and via DNA polymorphism markers (nuclear microsatellite loci). The most significant differences were found between the P. sibirica population from the oligotrophic bog and the group of other populations. From the viewpoint of selection, it is very important that P. sibirica population from the near-settlement pine forest, is also strongly distinguished by its genetic structure. This results will serve as the basis for the successful cultivation of the Siberian stone pine in other regions of the world – in northeastern China and in the Rila-Rhodope mountain system in Bulgaria.

In general, a wide range of issues were discussed at– the IPSAT 2018, the APAS 2018 and the National Botanical Congress. It was emphasized that because of growing human population and climate change people need safe and nutritious food and this should be realised by preserving habitats. These requirements can be met through the study of plants and the development of technologies for their use. The research in the field of palynology and aerobiology is closely related with the preservation of human health. These congresses aimed at sharing theoretical and applied data so as to keep abreast of all the latest developments in the fields of plant science and technology.

Interesting scientific questions were discussed not only during plenary and sectional speeches, but also on the sidelines, in an informal atmosphere of hiking along the seashore and watching magical beauty of the surroundings with many species of fragrant flowers, luxurious shrubs and trees, many of which were successfully introduced into local conditions. It was pleasant to discuss the problems since the majority of the scientists showed excellent knowledge of English, and Professor Rodinkova and Professor Emeritus M. Vladimirova Filipova-Marinova spoke fluent of Russian.

During the work of the congresses and symposium, an excursion to Bodrum s was organized for the participants. In the city one could admire the ancient castle of St. Peter and the ruins of the antique Amphitheater adjacent to modern shopping centers and shops, see the eastern market with a variety of goods, sea pier with yachts and fishing boats, stalls with fresh fish and, of course, pet huge cats of all the colors. Upon completion of the work of scientific events, everyone could enjoy an exciting sea voyage (Fig. 7). 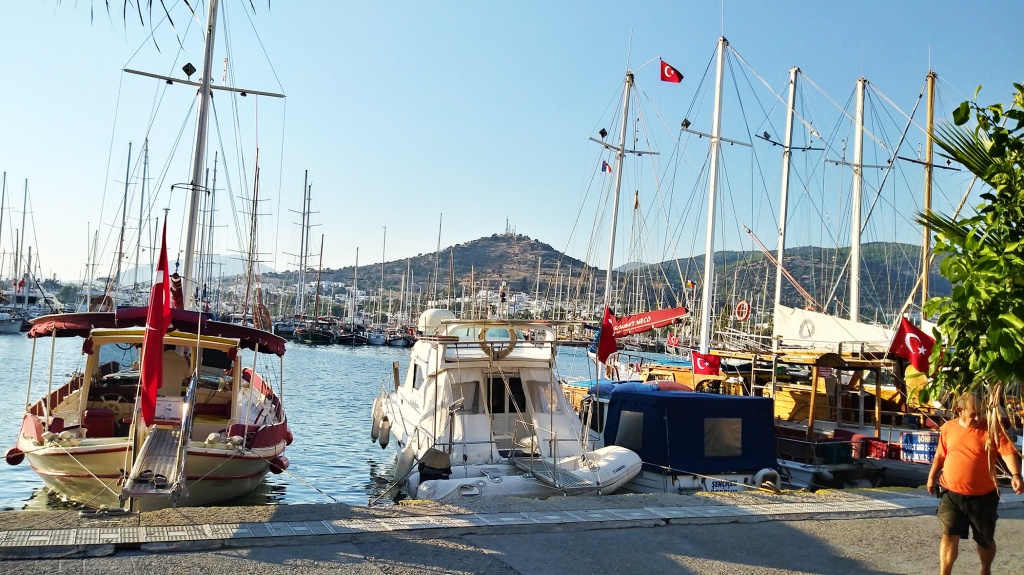 You can find the web sites of the 2nd International Plant Science and Technology Congress and (IPSAT 2018), the 5th National Botanical Congress, and the 2nd Aerobiology and Palynology Symposium (APAS 2018) at http://www.ipsat.gen.tr/, http://www.apascongress.org/

Leading Research Scientist for the Laboratory of Forest Genetics and Breeding,