Honey is an important source of nutrients and energy and an effective remedy against various human diseases. Honeydew honey is produced from honeydew of phloem-feeders that honeybees gather. In this study, we focused on honeydew producers and diversity of host tree species that are involved in honeydew production in Turkey. A total of 24 honeydew producers by host tree species are identified in Turkey. Of these, 13 coniferous trees and 11 deciduous trees. The main honeydew producer in Turkey is a scale insect, Marchalina hellenica Gennadius (Hemiptera: Margarodidae) living mainly on pines (Turkish red pine, Aleppo pine, and rarely on stone pine, Anatolian black pine and Scots pine). Honeydew producer insects can be treated as serious pests of conifer and broadleaf trees. The aphids and the scale insects such as Ceroplastes floridensis, Cinara cedri, C. laportei, Eulachnus rileyi, Icerya purchase, Kermes vermilio, Lichtensia viburni and Saissetia oleae are known as pests in several European, Asian and African countries. Despite their potential harm to their host plants, insect species producing honeydew play an important role in honey production in Turkey. Turkish honey production is exported to EU countries and, furthermore beekeeping is an important part of agricultural sector in Turkey.

One of the sources of honey in Turkey is so-called honeydew honey, which is produced by bees collecting sugar-contained matters on tree twigs. Honeydew is a sugar-rich sticky liquid, secreted by insect, mainly by aphids and scale insect, as they feed on plant sap. Aphids excrete the rest of the sugar substances after digesting the necessary nutrients. Bees convert this intense sugary substance into honey called honeydew honey (Schmutterer, 1953, 1956; Pechhacker, 1977; Zander and Koch, 1994). Honeydew honeys are known and appreciated by their particular characteristics of strong colors and flavors. The composition criteria for honeydew honeys in respect of fructose and glucose content, as well as with regard to electrical conductivity are different than the composition criteria for floral honeys (Sancho et al., 2008). Scientifically and philosophically precise definitions of honeydew are elusive and references can vary widely. Manna, honeydew and nectar are the words used throughout the Ancient World to describe sweet desirable liquid or crystalline substance sometimes referred to as «food of the gods» (Jones, 2008).

Honeydew honey refers to honey produced by the bees from the secretions of aphides and other bugs, feeding on plant sap. This honey is considered to be a delight in some areas of the world because of its taste and because its rarity. Honey is produced mainly in Turkey, Greece, Germany, Austria, and Spain. In Turkey the dominant tree species for production of the honeydew are pines, mainly Pinus brutia, and then firs, cedars, oaks, junipers and olives (Ermin, 1950; Crane and Walker, 1985; Gürkan, 1988; Morales et al., 1988; Kunkel, 1997; OGM, 2009; Rybak-Chmielewskahszczesna, 2013; Ülgentürk et al., 2013a). Overall, the season of honey production is longer in comparison to flower honey production season because the former begins in the second half of August and lasts till the end of October. This prolonged honey production season is essential for income of beekeepers living in marginal areas and thus important for the intensive agriculture (MAYBİR, 2008; OGM, 2009). Anatolia's geographical location, land formation, climate varieties, variety of plant and insect species, provide different agricultural forestry systems and various insect-plant combinations.

This study reviewers the diversity of insects producing honeydew and their host tree species involved in honeydew production in Turkey.

Honey is one economically important production. Turkey is one of the 10 largest producers of honey and particularly the largest producer of pine honey, with approximately 15 000 tons of production each year (Sunay, 2008). Pine honey constitutes one fourth of all the honey produced in Turkey. Pine honey is a honeydew honey based on honeydew production by a scale insect Marchalina hellenica living mainly on Turkish pine Pinus brutiaand stone pine P. pinea (OGM, 2009; Ayan et al., 2014) (Fig. 1, 2). 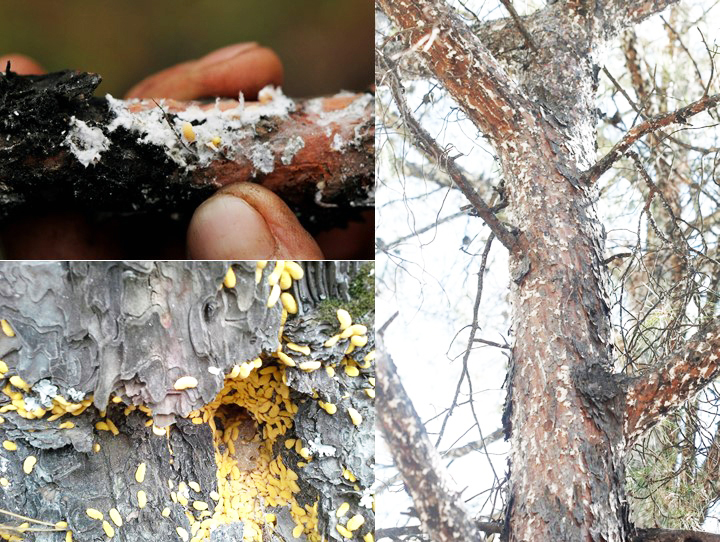 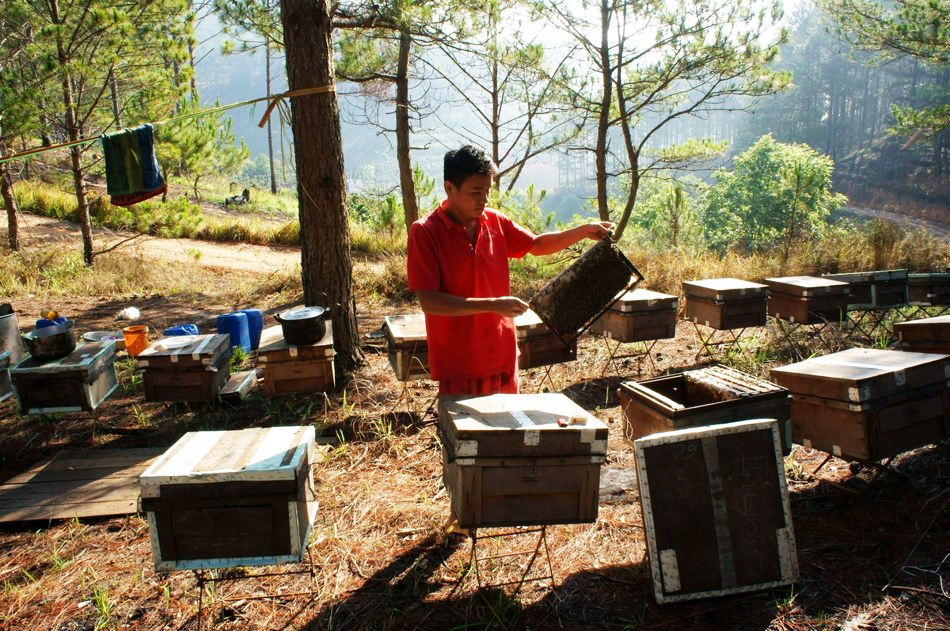 Droplets of honeydew are collected by honeybees and used to make honeydew honey. There are 35 species from Hemiptera order as well as Marchalina hellenica which produce sugar contained secretion from phloem sap of various plants (Tables 1, 2) (Ülgentürk et al., 2013a).

The most important characteristic of pine honey is its consistency and durability for many years. The forest land of 1000 m2 produces approximately 20–25 kg pine honey (Mere, 2010). The pine honey from forests forms about 25 % of all the honey produced in Turkey (OGM, 2013). The major pine honey areas for the pine honey productions are in the provinces of İzmir, Aydın, Kuşadası, Dilek Peninsula, Milas, Bodrum, Mugla, Marmaris, Datca, Fethiye, Kas, Balıkesir, Manisa and Canakkale in Mediterranean and Eagean regions in Turkey. About 80 % of all pine honey in Turkey comes from the province of Muğla (Mere, 2010) where nearly ten thousand beekeepers derive their livelihood from pine honey production. M. hellenica is the most common and abundant species there. According to the data from years 1991–2011, yield of pine honey varied from 7 970 to 15 000 tons of the total honey production per year (Firatli et al., 2010; TUİK, 2013; Ülgentürk, 2013a). In Greece annual honey production amounts approximately to 15 000 tons of which about 65 % is derived from honeydew (Bacandritsos, 2004). In general, the majority of Turkish honey production is exported to the EU countries providing in average $ 9–12 million of income. Due to its impact on the economy and employment, beekeeping is an important part of agricultural sector in Turkey, especially in the Muğla province (Ülgentürk et al., 2013a).

Thirteen conifer and eleven broadleaf species were determined as the hosts of the insects producing honeydew (Table 1, 2). Among them, twenty plant species are native and three are exotic: Pinus pinaster, Quercus suberand Acacia sp. (Table 1, 2).

Regarding to the producers of honeydew, Marchalina hellenica seems to be the most significant species for pine honey production. Its stable population is a basic condition for honeydew collection by honeybees (Gürkan, 1988; Gounari, 2006; Ülgentürk et al., 2012a, b, c). Apart from Turkey, M. hellenica has been recorded in Greece and Italy (Bacandritsos, 2004; Kandemir, 2009). The cedar of Lebanon, Cedrus libani, has been recorded as a new host plant of M. hellenica. The infested cedars are found exceptionally in urban areas (Ülgentürk, 2013a). The relation between cedar and M. hellenica should be studied more deeply because the infested cedar trees could become an important alternative for honeybees at higher altitudes (Ülgentürk, 2013a).

Aphids generally live on pine needles and twigs producing honeydew from early spring to late autumn. Contribution of the scales P. fuscipennis and P. yerushalmi to honeydew production is rather insignificant but P. fuscipennis is common in pine forests of eastern Mediterranean and Marmara regions, especially in areas where M. hellenica is very rare. In addition, the fir, Abies cilicica is determined as a new host plant of P. fuscipennis(Ülgentürk, 2013a).

In the Mediterranean region, Cinara cedri on Cedrus libani is the second important honeydew producer. It excretes large quantities of honeydew from April to late June and from September to late October. The honey made from this honeydew could be an appropriate alternative for pine honey production (Ülgentürk et al., 2012c).

Only the scale insect, Puto israelensis, is known to produce sufficient amount of honeydew on broadleaf trees. P. israelensis usually reaches high population density and produces honeydew during the whole spring. Additionally, Parthenolecanium rufulum was recorded on oaks (Ülgentürk et al., 2013b). The distribution of honeydew producing insect species in the different regions of Turkey is given in Fig. 3. 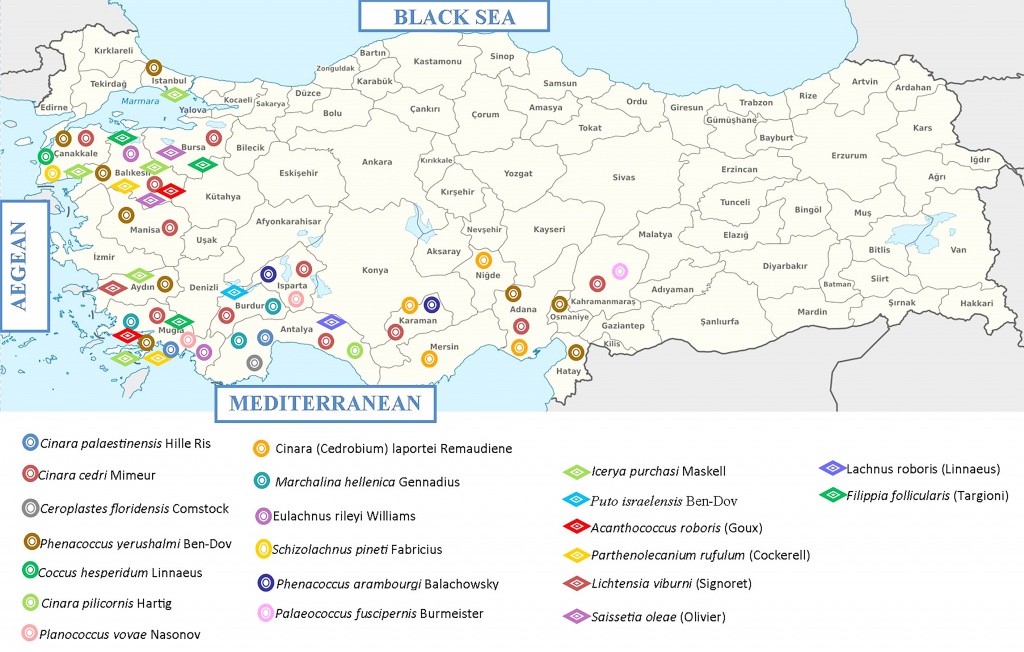 Figure 3. Distribution of the honeydew producing insect species in Turkey.

In Turkey, the pine honey is mostly produced from honeydew of M. hellenica and 85 % of this yield has been exported to the EU countries (Fıratlı et al., 2005). In spite of the existence of other honeydew producing insects in Turkey, the data about their participation in honeydew production are rather limited.

During the half-century, the number of bee colonies increased by 3 million, while the forest areas used by bees decreased by 5 million ha, and pastureland areas by 16 million ha (Fıratlı et al., 2010). For this reason, the Ministry of Forest and Water Affairs and the General Directorate of Forestry has prepared an action plan on so-called bee forest. This plan is focused to honey production, which will subsequently assure not only enhancement of income for local residents but also certain protection of forest lands. Importantly, the main part of the plan is based on honeydew production made by the scale insect, M. hellenica. Other honeydew producing insect species and their potential contribution to honeydew honey produce in Turkey need deeper research.

The authors would like to thank to Yüksel YANMADIK, Director of Non-wood Products in Muğla Forestry Regional Directorate (Turkey) for sharing the photographic archive.

Rainato A., Pellizzari G. Observations on the biology of Parthenolecanium rufulum in northeastern Italy, with a redescription of the first and second instar females // Bull. Insectology. 2009. V. 62. N. 1. P. 85–91.