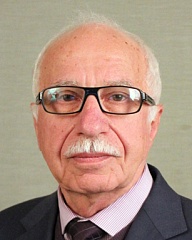 Bebiya Sergey Mikhailovich, born 15 September, 1940. Graduated from A. K. Kortunov Novocherkassk Institute of Engineering and Meliorations (NIEM) (since 2013 NIEM is branch of the Don State Agrarian University), Faculty of Forestry, in the city of Novocherkassk, Rostov Oblast, Russia (1964). Candidate of Agricultural Sciences (PhD, 1971), Doctor of Biological Sciences (1999) in Forest Science and Silviculture; Forest Fires and Fire Fighting. PhD thesis: «Pikhtovye Lesa Abkhazii i Osnovy Vedeniya Khozyaistva v Nikh» (Fir Forests of Abkhazia and Basics of Their Management), Lviv, Lvivsky Inst. For. Engineer. (at the present time – National Forest Engineering University of Ukraine), 1971 (in Russian). DSc thesis: «Pikhtovye Lesa Kavkaza, ikh Ispolzovanie i Okhrana» (Fir Forests of Caucasus, Their Use and Protection), Mytishchi, Moscow Oblast, Moscow State Forest University (MSFU) (in 2016 MSFU reorganized to Mytishchinski Branch of N. E. Bauman Moscow State University of Technology), 1999 (in Russian). Professor (2006), Academician of the Abkhazian Academy of Sciences (2009), Academician-Secretary for the Department of Biological, Medical, Agricultural, and Earth Sciences, Vice-President for the Abkhazian Academy of Sciences (2009), Head for the Department of Plant Introduction, Institute of Botany of the Abkhazian Academy of Sciences, Head for the Department of Botany and Forestry, Faculty of Biology and Geography, Abkhazian State University. The Honored Scientist of the Republic of Abkhazia (2013), Laureate of the Republic of Abkhazia State Prize for Science by the name of G. A. Dzidzaria. A prominent scientist botanist, forester. Expert in history and geography of mountain forests of Eurasia, dynamics of plant communities, forest science, dendrology, plant systematic and introduction, ecology, and nature protection. Member of more than 30 scientific expeditions to the mountain forests of Eurasia, numerous international scientific conferences, European and World Congresses of Botanical Gardens. Taught courses on mountain forestry in Higher Forestry School of the Tharandt (at the present time - Department of Forest Sciences Faculty of Environmental Sciences Technical University in Dresden (1979), in the Adygei State University (1999), in the Faculty of Forestry at Novocherkassk State Engineering and Melioration Academy (2012). Member of the U.S. National Geographic Society (1987), Moscow Society of Naturalists (1987), Council of Botanical Gardens of Russia, Belarus and Kazakhstan (2002). Authorized representative of the Ministry of Foreign Affairs of the Republic of Abkhazia on science and culture in Hungary. Holder of an Order "Akhdz Apsha" ("Honor and Glory") of the 2nd degree of the Republic of Abkhazia. Author and coauthor of more than 120 papers, including several books. Some of them: "Natural Regeneration of Pine Trees on the Southern Slopes of the Western Part of the Greater Caucasus", Moscow, 1968 (in Russian); "Pitsunda-Musserskii Nature Reserve", Moscow, 1987 (in Russian); "Differentiation of Trees in the Forest, Their Classification and Definition of Vital State of a Tree Stands" In "Lesovedenie" (Rus. J. For. Sci.), 2000 (in Russian with abstract in English); "Ecological and Geographical Features of Gymnosperms in the Island of Taiwan" In "Bull. Moscow Soc. Naturalists", 2000 (in Russian with abstract in English); "An Expedition to the Island of Taiwan" In "V Mire Rastenii" (In the World of Plants), 2001 (in Russian with abstract in English); "Fir Forests of the Caucasus", Moscow, 2002 (in Russian); "In the Steppes and Forests of the Mountain Altai" In "Priroda" (Rus. J. Nature), 2003 (in Russian with abstract in English); "Relations of Сonservation of Plant Diversity and Forest Productivity in the Colchis Floristical Refugium" In "Studia Botanica Hungarica", 2010; "Introduction of Woody Plants and Ex Situ Conservation in Face of Climate Change" In Proc. 4th Global Botan. Gard. Congr., Dublin, Ireland, 2010; "Fir Forests of Russia", Moscow, 2012 (in Russian with summary and contents in English).