The volume of Japanese cedar (Cryptomeria japonica (Thunb. Ex. L. f.) D. Don), «sugi» in Japanese) plantations was estimated by using the Japanese satellite ALOS (AVNIR-2, PRISM) to identify sugi plantations as a forest resource. We performed highly precise geometric corrections by locating ground control points (GCP) on the RPC (Rational Polynomial Coefficients) geometric correction image. DPR (Dual Partitioning Regression) was used for the topographic correction. The forest was extracted by primary classification and sugi stands by secondary classification. The overall accuracy of the primary classification was 94 % and that of the secondary classification was 89 %. Parameters effective for estimating volume per hectare were selected by multiple regression analysis between volume and average digital number of each band (band value) by a stepwise procedure. Regression equation using the reciprocal of band 4 (Near IR) value was significantly effective. We demonstrated that the area with a negative NDVI value is not a sugi forest. By identifying these areas using periodical satellite monitoring, the accuracy of the forest register can be increased and this helps facilitate the practical use of the sugi forest. 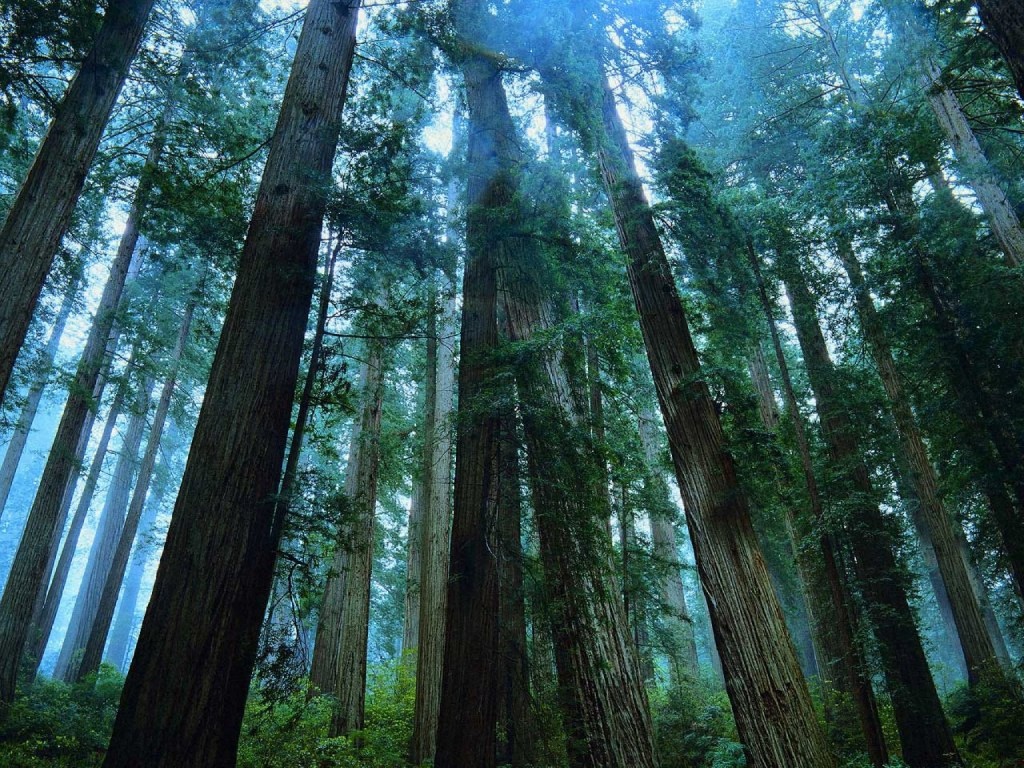 Many sugi stands have matured to cutting age, but the timber price is sluggish and we need to reduce cutting expenses to promote their practical use. In Japan, the forest basic map and forest register are used for management of manmade forests. However, volume in the register is calculated using the growth curve incorporated into the database, and differs from the actual volume. There are some reports that estimate the volume of sugi plantation using space image data (Abe, Ishida, 2004; Abe, Iida, 2009). The Landsat space image has been used to estimate the forest volume in the past. However, the Japanese satellite ALOS (Advanced Land Observing Satellite) has not been used for this purpose. The accuracy of the estimate may vary with the satellite. In this study we used ALOS to estimate the volume of sugi forest.

The objectives of this research are:

a) to evaluate the best-fit equation model for the timber volume between digital number and volume per hectare;

b) to investigate factor on the accuracy for equation, and

The study area is located in Jhoetsu district, Niigata Prefecture, and covers approximately 2165 km2. Image data sets used in this study were obtained from ALOS satellite by AVNIR-2 (Advanced Visible and Near Infrared Radiometer), and  PRISM (Panchromatic Remote Sensing Instrument for Stereo Mapping). PRISM was used to construct pan-sharpened images. The acquisition metadata of ALOS satellite are shown in Table 1.

For image processing we used ERDAS ver. 9.1 (ESRI, 2009), for topographic processing the digital map, and for geometric correction, the 1/5000 scale forest basic map. The basic map was transferred to GIS. For topographic correction, the digital map (50 m mesh, Geospatial Information, 2009) was used. Plots were established based on the Niigata Prefecture Forestry Division method (plot size was 40 m × 40 m, tree height and stem diameters were measured for each tree).

This paper deals to extract forest by supervised classification. Classification of image usually is made on pixel units, but it includes differently classified small pixels. Therefore, to classify the area smoothly, we used ERDAS (ESRI, 2009) which has a function to classify the pixel image smoothly. This function uses digital numbers of circumferential 25 pixels focusing on a certain pixel, and modify the classification using the most frequent pixel value. Thus, we can make thematic images smoothly to delete the small classified pixels. Usual classification figures before and after removal of small pixels are shown in Figure 2. Figure 2 b looks much close to natural condition. 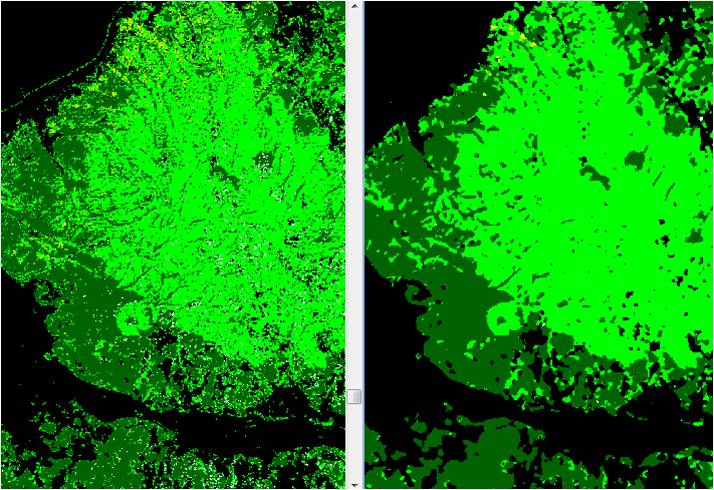 We used the ALOS image after RPC geometric correction (RPC file). This RPC file is made from the projection model using an approximate polynomial curve coefficient. Approximation by RPC data is shown by rational function of standardized latitude, longitude and altitude, and is given by the standardized polynomial coefficient (EORC/RESTEC 2009).

Usually, the accuracy of geometric correction is shown by RMSE (Root-Mean-Square Error), but not by RMSE when RPC is used. RMSE value is desirable within 0.5. But, this time, RMSE value was 13.2532 in AVNIR-2 and 17.5745 in PRISM by ERDAS (2009). This cause have not been discovered. 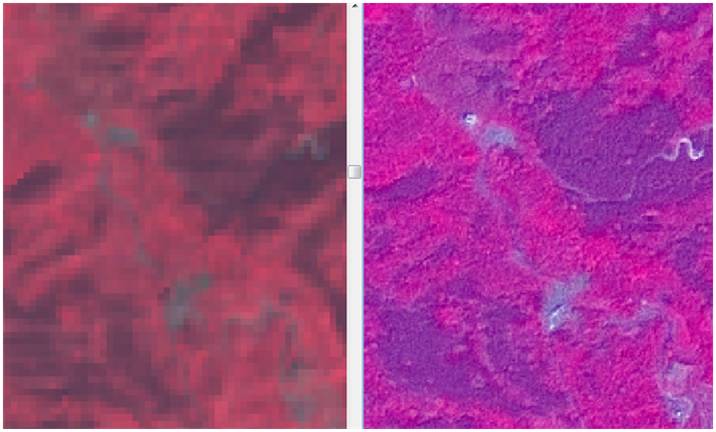 Thus, we can visually decipher forest, road, sugi stand, and broadleaved stand. Pan-sharpen image is precisely corrected geometrically by AVNIR-2 and PRISM, and the pan-sharpened image is useful to take training area polygons in the scene.

It was inadequate to show accuracy of geometric correction using RMSE in case of RPC file. This is because the RPC model shows good correlation between the image and map for flat ground but not mountainous areas. In this study, the majority of the study area is mountainous. Therefore, geometric correction was performed by using more than 60 ground control points (GCP) for AVNIR-2 and PRISM images. We checked various points image and map using geo-link (Fig. 4). 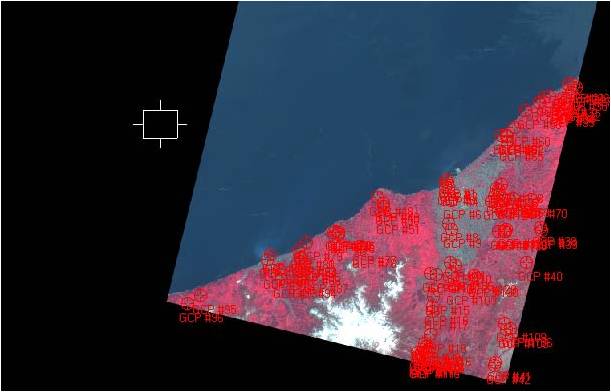 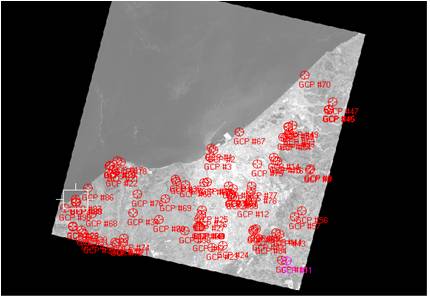 Fig. 4. Location of GCP at AVNIR-2 and PRISM scenes.

Here, the geo-link image in the mountainous area is shown (Fig. 5). Other point showed same accuracy.

Fig. 6. Topographic correction of ALOS scene by the Dual Partitioning Regression method (a), and by Minnaert method (b). 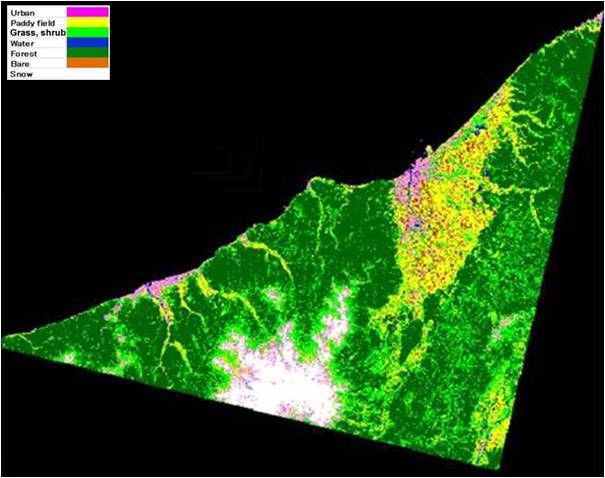 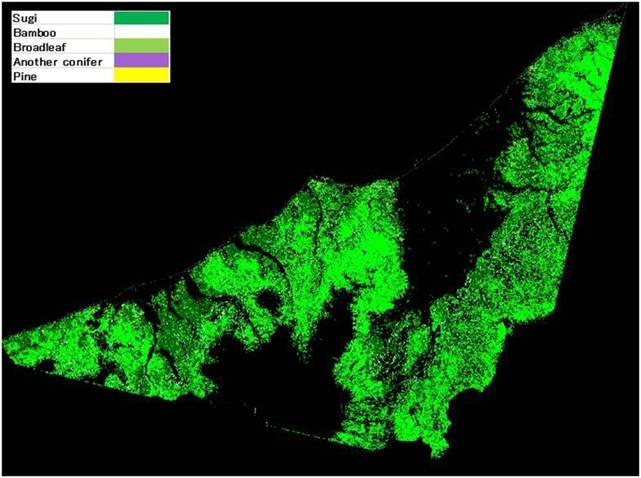 Table. 2. The area of land categories by spectral class of primary classification


Table. 3. The area of tree stands by spectral class of secondary classification

Fig. 9. The aggregate by spectral class areas on ALOS scene, allocated by region growing tool for 20 pixels (a), and 100 pixels (b).

Table. 4. The parameters for estimating volume (V) per plot selected by multiple regression and stepwise procedure

Analysis of variance shows that the regression equation is significant, but coefficient of correlation was not high. In this case, the multiple correlation coefficient was 0.2595 (Table 5).

Table. 5. Analysis of variance of the regression equation

On the other hand, NDVI (Nomalized Difference Vegetation Index）is known as an effective index for analyzing vegetation. When volume is shown as a function of bands 1, 2, 3 and 4 and NDVI, and analyzed by a stepwise procedure, the significant variable (at 5 % level) was only Band 4 (F value 3.618). The highest correlation coefficient (r = 0.304) was obtained by the following formula and showed analysis of variance on Table 5.

Figure 10 shows the correlation between volume and reciprocal of band 4 value, and Table 6 shows the area with estimated volume classes obtained using above equation. 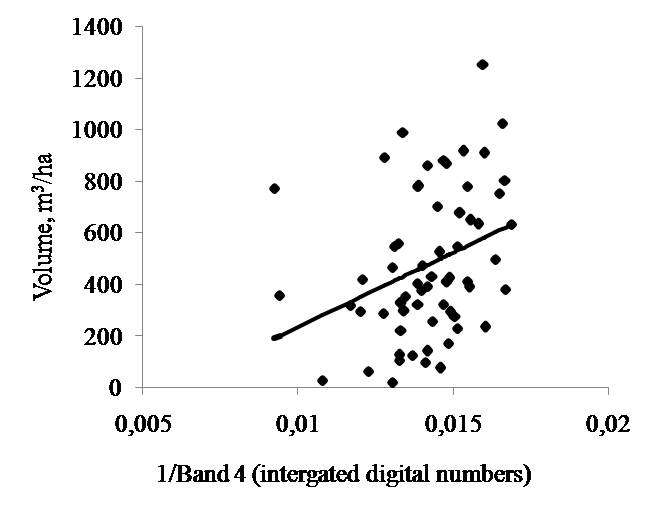 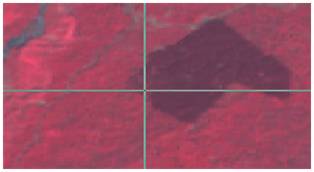 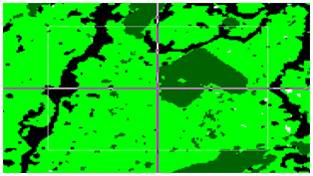 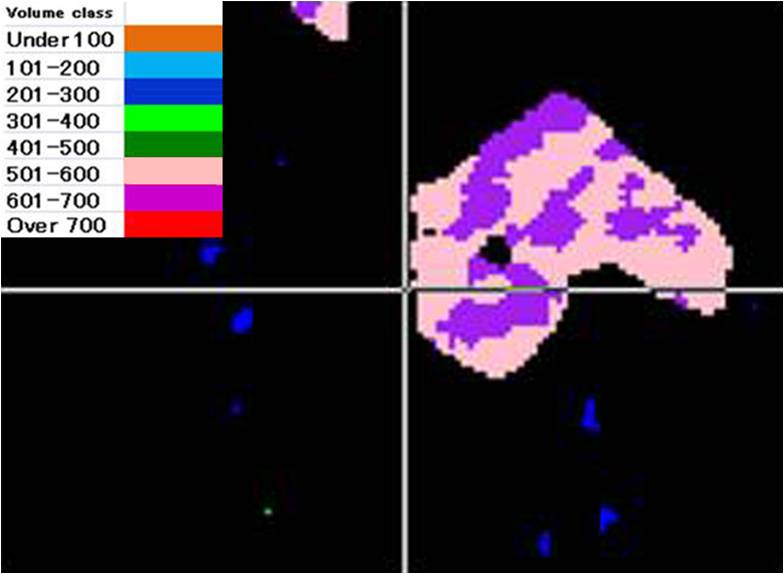 5) Criterion of non-vegetation by NDVI

Table 7 shows the areas with different NDVI classes in the sugi forest register. 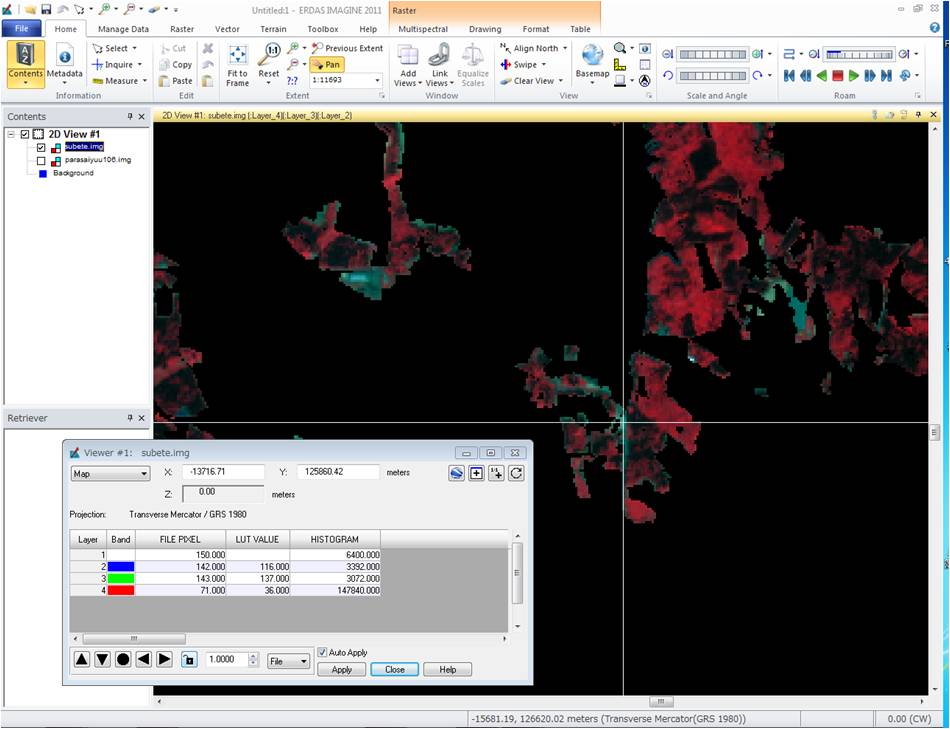 In our previous study with space images, the study area was often small watershed (Abe and Ishida, 2004, Riva and Abe, 2006). In this study, therefore, we attempted to estimate the sugi stand volume in the ALOS full scene range.

In many previous studies, the Landsat satellite was used to estimate forest volume and studies were focused on the effective band (bands 1, 2, 3, 4 ….).

C. B. Puhr and D. N. M. Donoghue (2000) reported the relationship between estimated basal area and each band value using the Landsat TM data. Significant correlation was observed with bands 3, 5 and 7 values but not with band 4 value.

M. A. Spanner et al. (1990) reported that the volume of stand with low Leaf area index (LAI) was closely correlated with the values of bands 3 and 5, but that of the stand with high LAI with band 4 values.

J. Ardo (1992) reported that the correlation coefficient between volume and band value is higher in a small volume stand than in a large volume stand.

F. Gemmel  (1995) reported that the correlation was lower in the stand with over 400 m3 volume stand.

It is considered that the correlation between band value and volume is greatly influenced by the forest conditions. Various forests were used in this study from boreal forest (Ahern et al.,1991) to radiata pine (Pinus radiata D. Don)  (Trotter et al., 1997). It is considered that the accuracy of the estimation of volume by using band values varies with the tree species, understory vegetation, forest type and the volume class. Thus, it is necessary to accumulate these data in the future.

In this study using ALOS, correlation coefficient between volume and band 4 value was low though statistically significant. This may be because the study area was wide including various sugi stands.

Table 8 shows the coefficient of variation range of volume estimated using each band.

Table 8. Coefficient of variation range of each band and volume

Abe et al. (2004 and 2009) examined what bands are effective in estimating volume using a high-resolution satellite, and showed that only the band 3 value showed significant correlation with volume, which is different from the result of this study using ALOS. The resolution of ALOS is 10 m, which is intermediate that between the resolution of the Landsat and high resolution satellite Quiсk Bird. The relationship between volume and band value may be affected by resolution of the satellite in addition to band, forest type, tree species, understory vegetation and others. It is necessary to verify the results by increasing the number of analyses.

Japan has a forest resource database system, but it is not easy to check the contents of the register. The construction of a system that can point out the mistake of the register using a space image is very important. As shown in this study, the area where the NDVI value is negative is not a sugi forest. The negative NDVI value means that the band 3 value is larger than the band 4 value. It is well-known that the band 4 value is large in a vegetation area. Thus, the area with a negative NDVI is a forest road, timber yard, felling area, etc., which need to be corrected in the register. This means that the register can be corrected by using periodical satellite information and this greatly contributes to encouraging the practical use of sugi forests.

In the present study, the volume of sugi forests distributed in a wide area including mountainous area was investigated using the space image. The relationship between volume and reciprocal of band 4 value (digital number) was significant, but the correlation coefficient was low (r = 0.3). The coefficient of variation of volume was larger than that of the digital number of each band (band value). The low correlation coefficient between volume and band value may be attributed to smaller variation range of digital number compared with that of volume. On the other hand NDVI is an effective index of vegetation area. We showed that the area with a negative NDVI value is not a sugi forest. Improvement of the accuracy of sugi forest data base by using these methods may contribute to encouraging practical use of a sugi forest.